An anonymous parishioner has generously purchased numerous copies of a riveting documentary regarding the Eucharist.  The DVD is entitled SCIENCE TESTS FAITH and will be available for purchase in the gift shop this week and also available in the library for check out.  This documentary looks at the Eucharist in a scientific way and affirms the catholic teaching of the Real Presence.

Our parking lot has been the source of more than few unpleasant experiences for our parishioners over the years.  I have also heard my share of strange stories regarding vehicles being run into, backed into and scratched.  Unfortunately, it is a parking lot, and we are unable to accommodate the victims of such an event if the perpetrator leaves no contact information.  This past Sunday, one of our maintenance employees (Sebastian Arbelaez) was working in the ballroom for the Family Ministry Thanksgiving event while his car was parked in the paved parking lot between the church and PLC.  The spot Sebastian chose was one that has a short Cocoplum hedge right in front.  Now, let me digress… The reason Sebastian was driving his car was due to the fact that he “wiped out” on his motor scooter while attempting to drive to work that morning.  When I saw him at the brunch, he was covered in blood from road rash on his right side arms and legs.  The scooter was left inoperable so he had no choice but to drive his car.  Sometime between 9:00 a.m. and 11:00 a.m. someone must have been attempting to park their car in the grass parking area opposite Sebastian’s car and hit the gas instead of the brake.  They 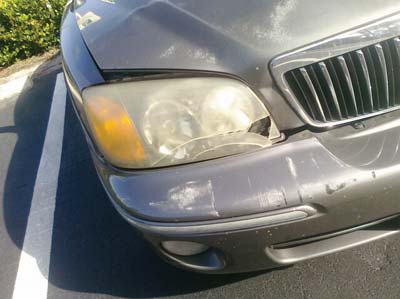 drove through the hedge and completely smashed the front of his car.  There must have been some speed involved as it completely buckled his hood and caused substantial damage.  In these situations, I like to think that the individual who perpetrated this act must not have been aware.  There was no note left with contact information. I know we have all had our share of bad days, but for Sebastian, this past Sunday has to rank at the top of the list in his short life.  He is a college student majoring in business and has considered the priesthood as a possible vocation. If you feel you may have caused this accident or if you were witness to the occurrence, please contact me to discuss.

Kathy Sims (Director of Communications) is in the final stages of putting together our 2012 parish calendar.  This year’s calendar looks to be a vast improvement over last year with more ministries and more pictures.  The pictures will correspond to the particular month of the year, as much as possible.  We are confident that you will appreciate our 2012 calendar which will be available near the first of the year.  And how are we able to offer this custom calendar to our parishioners at no cost?  You guessed it!  Messner Publications is printing the calendar with revenue generated through the sale of advertisements and an additional donation made by Shikany’s Bonita Funeral Home.

Lighting Update
Many of you are most likely tired of reading about our lighting project as I have mentioned it in my column for several weeks now.  Since many of our seasonal residents and visitors have returned I will run it one more time.  We now have received $17,000.00 and are nearly 25% of the way to a new lighting system.

We have made great strides during the past several years to enhance the buildings and grounds here at St. John the Evangelist.  As I mentioned several weeks ago, the last remaining major project is the lighting in the church.  I will begin with a little history:  The church is now nearly 19 years old with the first Mass being celebrated on Christmas Eve in 1992.  The original lighting is still in place and the problems are now mounting at an exponential rate.  First and foremost, the original lighting was designed and installed for more of a residential application and certainly not a commercial application.  In order to change any of the bulbs in the ceiling or on the clerestory windows, a lift must be rented and the front doors removed.  This isn’t your basic scissor lift but instead a 45’ boom lift which will allow the operator to reach the 55’ ceiling.  The lift must be carefully navigated down the center aisle so as to not damage the pews.  There is a clearance of a half inch on either side.  There is obviously very little room for error.  Just to change the bulbs in the sanctuary, we spend several thousand dollars in lift rental, bulbs and labor.  The bulbs in the sanctuary ceiling are a combination of metal halide and par lamp spotlights.  The fixtures are controlled by an archaic Lutron dimmer pack system.  Even after replacing all of the bulbs in the ceiling, many burn out in as little as six months after replacement.  The lighting over the altar is mounted on a track system and consists of the same par lamp spotlights.  We replaced every single light and a few of the fixtures following the renovation last September.  As you can see, nearly half of these bulbs have burned out in less than a year.  Many burned out after only six months.  The lighting over the altar is also controlled by the dimmer packs.  The dimmer packs have reached the end of their useful life.  We have replaced a few and the problems still persist.  Due to the malfunction of the dimmer packs, much of the lighting has been rerouted, bypassing the dimmer packs.  As for the rest of the church, the lighting is very poor at best.  The Narthex is very gloomy and dark.  The back wings are also very dark, even after removing the old wood ceiling two years ago.  The lectors and the celebrant often have a very difficult time reading the word of God from the Ambo.  We have made numerous patches over the years but the problem seems to worsen as time goes by.

We have met with a commercial lighting professional to address our problems.  They have come up with a solution which will illuminate the church while solving the problems of maintenance.  With this new proposal, we will be able to lower the lights over the altar for easy access.  We will replace the fixtures in the sanctuary ceiling to new energy efficient fixtures and bulbs with a life over ten times what is currently in place.  We will also illuminate the narthex and back wings by installing very tasteful chandeliers and adding ancillary fixtures.  The entire system may be controlled by an Ipad from anywhere inside the church.  There are 999 different scenes which may be programmed and accessed simply by the push of a button.  The stage lighting proposed above the altar may be manipulated in a plethora of different variations, even including the addition of color.  Imagine being able to flood the back walls of the Altar with green or purple to coincide with the particular color of the liturgical season.  The technological advances made over the past 19 years with regards to lighting have been numerous.  We would like to take advantage of these advances and install a new lighting system which will bring our church into the 21st century.  I am aware that many of you have a difficult time reading your missal due to the abysmal lighting in the sanctuary.  I apologize for the delay in addressing the lighting, however, we made a decision that temporary patches would no longer be acceptable.  The church lighting needs a total overhaul.

Our parishioners have shown their extreme generosity on numerous occasions in the past.  From the church renovation to the Prayer Garden, your outpouring of support has been key in allowing us to complete projects which would have otherwise not been possible.  Such is the case with our lighting project.  This lighting renovation obviously comes at a price and we knew that it would not be cheap.  The proposal to complete the job is approximately $70,000.00.  There is an error of +/- $5,000.00 based on the fixtures chosen for the chandeliers and ancillary fixtures.  We are not necessarily looking for a donation of $70,000 or even two donations at $35,000 (although that would certainly be nice).  Instead, we could pool our resources and eventually reach the goal of $70,000.00 in order to fix our lighting issues for good.

We had an unexpected surplus this past week for the 2011 Catholic Faith Appeal.  We are now nearly 75% of the way to our goal with just under two months remaining.  I know this seems an insurmountable task, however, we have been in a similar situation in the past and met our goal due to your generosity.  Thank you in advance for contributing to the Catholic Faith Appeal.

Molter Landscape has begun prepping our site for the planting of new annuals.  The annuals that were removed had been planted in November of last year during our first annual Parish Beautification Day.  We hope that you appreciate the new influx of color to our campus.

In His work together,