What amazing crowds we had this past Easter weekend. Because of Easter’s late arrival this year, I was questioning whether or not the crowds would be “epic” as in years past. 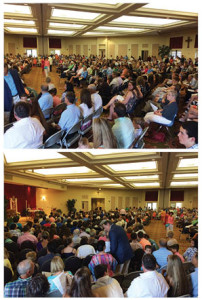 I found out first hand that Easter’s late date had nothing to do with thousands joining us to celebrate Mass. Trying to round up triplets and arrive in time to find a seat in church was an impossibility so I cleverly parked in the back of the PLC thinking that I would sneak in the ballroom and find six seats with just under 10 minutes to go before the 9:00 a.m. overflow Mass. Much to my surprise, when I opened the back doors, I found a ballroom filled to capacity with no open seats. I was able to bring out about 100 more chairs to accommodate some guests, however, there were people standing the entire Mass. Attached are some pictures of the ballroom at the 9:00 a.m. Mass on Easter Sunday. I am told that the crowd at the 11:15 a.m. overflow Mass was even larger. From the Vigil on Holy Saturday right through the 5:00 p.m. Mass on Easter Sunday, there was a great showing. It is estimated that in excess of 10,000 attended Mass over the weekend. Traffic, at times, was backed up on 111th Avenue North all the way to US 41. Although it was overly crowded, we are hopeful that you had a very spiritual experience here at Saint John the Evangelist.

The total collection from Easter weekend was $92,637.93. This is a decrease of $3,380.00 or 3.52% compared with last year, however, Easter was a full three weeks later in 2014, and we know that there are many who have already departed for their summer residences. Thank you for your extreme generosity! This is a great influx of cash to assist us as we move into the lean summer months.

The Men’s Club hosted their 7th annual Easter egg hunt on Holy Saturday. Soaking in abundant sunshine and low humidity, over 400 children and adults showed up to gather as many eggs as possible before heading back to the ballroom in the PLC for hamburgers, hot dogs and ice cream. So well organized was this event that I received numerous phone calls and emails expressing thanks to the Men’s Club. On behalf of everyone here at Saint John the Evangelist, many thanks to the Men’s Club for hosting another exceptionally well organized event to benefit the children of our parish. These men and their wives certainly deserve a nice break after hosting countless events this season!

If you were on campus on Holy Thursday or Good Friday, you may have noticed that we were having roof repairs completed on the very top ridge of the church. There was moisture seeping through the ridge and causing the wood ceiling to discolor. 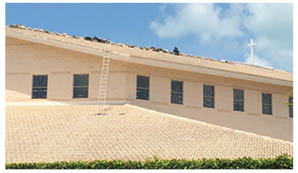 As you know, the church is now 22 years old and beginning to show its age. As a rule, concrete tile roofs have an average life expectancy of 20-30 years with some lasting much longer. Nevertheless, we are definitely placing the church roof on our list of capital improvements to be addressed in the very near future. The Church roof is a great example of the need for a capital reserve fund which you helped create back in March. In addition, we have put together a sub-committee to identify capital items and their estimated life expectancy and subsequent replacement cost. This Capital Budget Committee consists of members of our Finance Committee and our Buildings & Grounds Committee. They will be working diligently to develop a working three year Capital Budget which will take effect on July 1, the first day of our new fiscal year.

In addition, next month we will begin installation of six new AC units in the Parish Life Center. The units being replaced are now exactly 17 years old and have definitely seen better days. They are literally on their last legs. The coils in the new units will be installed with a special coating that will help them better compete against the salty environment considering our close proximity to the Gulf of Mexico. This will leave five units remaining to replace in Parish Life Center.

During Holy week, Marty Gauthier along with representatives from our AC vendor, adjusted the vents in church which will (hopefully) address the issue of some of you being very cold in Mass while others are cool and some are warm, all depending on where you may be seated. Many complain of drafts and we have worked diligently to fix this but to no avail as of yet. We are also working with a new control system for the AC and hope to have resolution in the near future. We humbly apologize to those of you whom we have frozen the past few months.
In His work together,