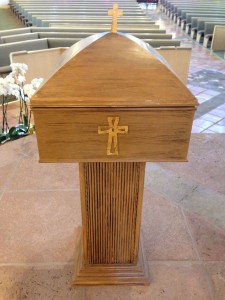 Pope Francis again illustrates to all of us this week that the openness to change is a core tenant of our faith. He expressed this truth during a Mass dedicated to the early church’s acceptance of pagans into Christianity:

“That was unthinkable. If – for example – tomorrow an expedition of Martians came, and some of them came to us, here… Martians, right? Green, with that long nose and big ears, just like children paint them… And one says, ‘But I want to be baptized!’ What would happen?”

Peter understands his error when a vision enlightens him to a fundamental truth: that which has been purified by God cannot be called “profane” by anyone. And in narrating these facts to the crowd that criticized him, the Apostle calms them all with this statement: “If then God gave them the same gift He gave to us when we came to believe in the Lord Jesus Christ, who was I to be able to hinder God?”

“When the Lord shows us the way, who are we to say, ‘No, Lord, it is not prudent! No, lets do it this way’… and Peter in that first diocese – the first diocese was Antioch – makes this decision: ‘Who am I to admit impediments?’ A nice word for bishops, for priests and for Christians. Who are we to close doors? In the early Church, even today, there is the ministry of the ostiary [usher]. And what did the ostiary do? He opened the door, received the people, allowed them to pass. But it was never the ministry of the closed door, never.”