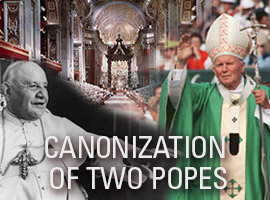 This Sunday, Divine Mercy Sunday, where we celebrate how mercy from God and from all of us to each other in our new “age of mercy” redeems the world, Blessed Pope John XXIII and Pope John Paul II will be Canonized as saints. But, how does that happen exactly? Why are they called Blessed now, when they are not saints? Here’s the cheat sheet on becoming a saint: