“We must never forget what happened on that fateful day,” — Julie and Tom Hartsell Family

The 9/11 Mass of Remembrance sponsored by the Knights of Columbus marking the 10th anniversary of the attack on America last Sunday was an overwhelming success with an estimated 1,200 or more in attendance.

The procession down the aisle began with the Harp and Thistle Bagpipe Band, the Knights of Columbus Color Corps, the United States Marine Corps Color Guard, carrying the colors. Following the Marines were New York City Firemen and Police Officers, Police Officers from the Port Authority of NY & NJ, as well as members of the Gulf Coast Retired Firefighters Association, the North Naples Fire Department and Collier County Sheriff’s Deputies, who joined their brethren from New York to honor the fallen. 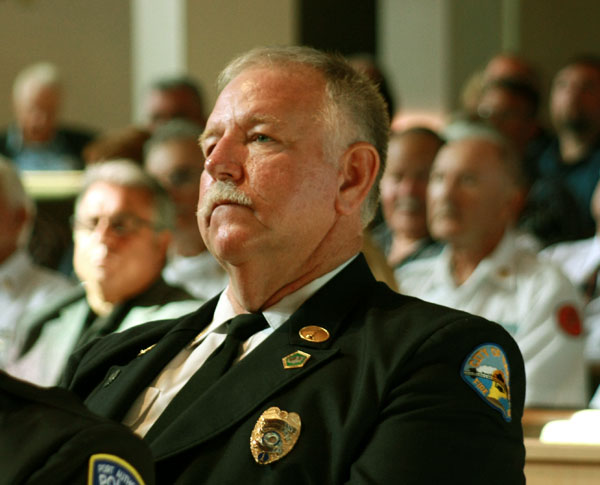 Tom Oram, Ellie Vandermeuse and the St. John Choir provided the music and were given a standing ovation by the congregation.  Fr. Len, who celebrated the 9:00 a.m. Mass, followed Jesus’s words in his homily, asking forgiveness.  “We must forgive, in order to be forgiven,” he said.

A piece of steel recovered from the rubble of the World Trade Center was on display outside the church and gave special meaning to what had happened on that day, along with a fire truck from the North Naples Fire Department.

Julie and Tom Hartsell, as well as their son and daughter in-law, said, “It was an incredible experience for all of us present,” and added,  “We must never forget what happened on that fateful day and today’s Mass brought it all back to us.”

Peter Tunucci said, “The Mass was wonderful.”  “It gave a special meaning to all of us, but especially to those New York City firemen and police officers who sacrificed their lives in the service of their fellow man.” 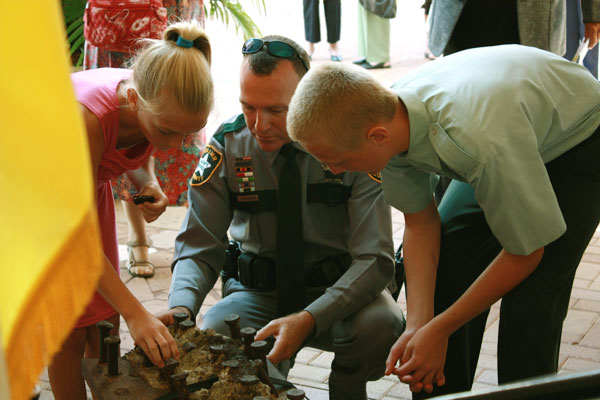 Nancy Palmer, visiting from Michigan, said, “The Mass let us relive the 9/11 attacks on our country and was a tribute that lifted our minds, consoled our hearts and ensured that the St. John community would never let that day pass into the history books.”

One woman who chose not to be identified said, “When the Marines fired their rifles and taps were played, I cried my eyes out.”

September 11 will mark the 10th anniversary of the terrorist attacks on New York City’s World Trade Center, the Pentagon and a field in Shanksville, Pennsylvania, when  brave passengers overpowered the hijackers and the plane crashed, killing all 45 aboard. 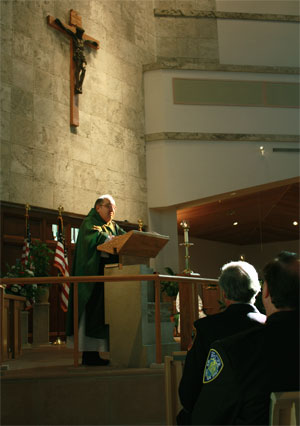 Here at St.John, both Our Lady of the Rosary Assembly 4th Degree Knights of Columbus and St. John the Evangelist Council 11281 will be sponsoring the 9:00 a.m.Mass on Sunday, September 11 to remember those who were murdered on that day of terror.

Members of the Gulf Coast Retired Firefighters  Association will have a piece of steel recovered from the Trade Center on display in front of the church before and after Mass, as well as a model of “Freedom Memorial” that is being built in Collier County, which honors the heroes of the 9/11 attacks.

The Harp and Thistle Pipe Band will lead the procession into church, followed by members of the K of C Color Corps and the United States Marine Corps League of Naples, who will present and post our colors.

Please join us on September 11 at the 9:00 a.m. Mass to pay tribute and pray for those brave souls who lost their lives at the hands of Jihadist terrorists.