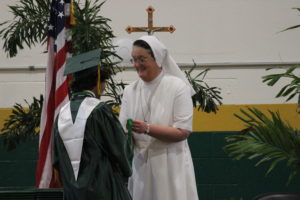 There are some of us that grew up with nuns and their rulers as our grade school teachers.  Still others of us had friars or Irish Christian Brothers that played basketball with us after school and sisters who served in the soup kitchen every weekend.  Our Catholic Church would be a quiet place indeed without those that have dedicated their lives to our faith and taken vows to poverty, chastity and obedience.  These individuals teach, serve, and shepherd us as a community and the world at large.  It is astounding to see the breadth and depth of Religious Life opportunities, in the various communities (Jesuit, Salesian, Franciscan, Dominican, etc.), and the types of efforts that the Religious take on.  From working in the slums of Calcutta to the halls of the most prestigious universities in the world, the prospects for Religious Life are as broad as those of us that are not called to that life.  So why it is that there is a continued decline in the numbers of those called to this special life?

There are many reasons for the decrease in those who heed the call to Religious Life.  The world has changed dramatically.  There are opportunities to provide similar service-focused careers without requiring the Consecrated Life devotions.  The secular world does not value the discipline, structure, and selflessness that it takes to join an Order and devote your life to the faith.  And, most of all, it seems, the Church itself needs to do a better job with illustrating the value of listening to God’s call.  It surprised me to know that in 2014, there were over 600,000 unmarried individuals that were seriously considering a vocation (CARA Special Report: Nurturing Vocations to Religious Life and Priesthood: The Impact of a Volunteer Service Year, Spring 2014).  That may be only 2% to 3% of Catholics, but that is over six times the amount of current individuals in Religious Life at the time.

The best way to build this amazing vocation is by seeing it in action.  Pope Francis, who himself is a member of an Order, illustrated this need best:

… I ask the whole Christian people to be increasingly aware of the gift which is the presence of our many consecrated men and women, heirs of the great saints who have written the history of Christianity. What would the Church be without Saint Benedict and Saint Basil, without Saint Augustine and Saint Bernard, without Saint Francis and Saint Dominic, Saint Ignatius of Loyola and Saint Teresa of Avila, Saint Angelica Merici and Saint Vincent de Paul. The list could go on and on, up to Saint John Bosco and Blessed Teresa of Calcutta. As Blessed Paul VI pointed out: “Without this concrete sign there would be a danger that the charity which animates the entire Church would grow cold, that the salvific paradox of the Gospel would be blunted, and that the “salt” of faith would lose its savour in a world undergoing secularization” (Evangelica Testificatio, 3).

So I invite every Christian community to experience this Year above all as a moment of thanksgiving to the Lord and grateful remembrance for all the gifts we continue to receive, thanks to the sanctity of founders and foundresses, and from the fidelity to their charism shown by so many consecrated men and women. I ask all of you to draw close to these men and women, to rejoice with them, to share their difficulties and to assist them, to whatever degree possible, in their ministries and works, for the latter are, in the end, those of the entire Church. Let them know the affection and the warmth which the entire Christian people feels for them.

I hope you will thank the Salesian Sisters that are here this weekend at our Parish, and continue to support their efforts and all those in Religious Life.