Home #FamilyMission The Cross is the Mystery of God’s Love

The Cross is the Mystery of God’s Love 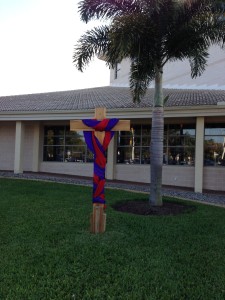 One of my favorite memories of celebrating Easter here at Saint John came from gathering in the Ballroom a few years ago. Family, friends, relatives. Father Len got up to give the Homily, and as only he can do, he summed up the entirety of our faith in a few short words: “This is the day the Lord has made, let us rejoice and be glad!” Then, he sat down. Could it be shock that made the room silent? Perhaps, since some in attendance were not prepared for such a Homily. However, I think it was mostly due to the realization of the love, healing, and grace that come from those words that illustrate the beauty of Catholicism.

Pope Francis reminds us of this too, when he described how the Cross of Jesus is more than just a symbol:

The Cross is not an ornament that we must always put in the churches, there on the altar. It is not a symbol that distinguishes us from others. The Cross is mystery, the mystery of God who humbles himself, he becomes ‘nothing.’ … Christianity is not a philosophical doctrine, it’s not a programme for life survival or education, or for peacemaking. These are consequences. Christianity is a person, a person raised on the Cross, a person who annihilated himself to save us, who became sin. Just as sin was raised up in the desert, here God who was made man and made sin for us was raised up. All our sins were there. You cannot understand Christianity without understanding this profound humiliation of the Son of God who humbled himself and became a servant unto death, even death on a cross, in order to serve us. – Pope Francis 2014-04-08 (http://www.news.va/en/news/pope-francis-the-cross-is-not-an-ornament-but-the)

Let us Rejoice and Be Glad!